INTERRACIAL DATING: 5 top reasons why he is still speaking with his ex 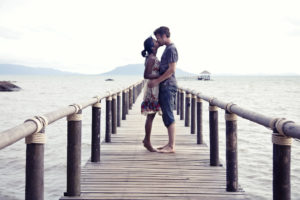 When you get into a new interracial relationship, it is important for you to understand where your current boyfriend stands with their ex-girlfriend. If there is communication between them, you have to get to the bottom of it and understand why there are still in touch. Below are some of the top reason your boyfriend has maintained a level of communication with his ex.

A couple that was once love and broke up, might share a child or two together. If the reason he is still talking to her is the children, you have no right to stop him talking about custody issues with her. No man wants to be alienated from their kids even after they find a new girlfriend. Anything to do with the children he has with his ex is territory you should not invade. Stay clear of it and let them deal with it amongst themselves.

Most people who break up after dating do not remain friends but some people do find a way to have a respectable level of friendship after partying ways. If your boyfriend simply sees his ex-lover as a friend and nothing more, you should embrace that and try to be her friend too. This will make things less strange from everyone in the relationship and all three of you can become close buddies.

3. They have some issues to deal with

This is very common in a couple that recently broke up. There will be things that they will need to work out by themselves but it is important to look out for anything out of the ordinary. If their conversation is a bit too friendly, they could still have romantic feelings for each other and you are just the stopgap. Don’t be the woman on the side or the third wheel as many people call it. You should look to be the main lady in the relationship and if he is not willing to make you the number one lady, walk away from the relationship because you might end up with egg on your face.

This is the worst scenario you can ever find yourself in as a woman when you think you have found the perfect lover and they are still in love with their ex. Have an honest conversation with him to see where his heart is and if he says he is still in love with her, tell him to do what will make him happy and go to her. You do not want to hold on to someone or be in an interracial relationship with a person who still has feelings for their ex.

5. They have mutual friends

It is not out of the ordinary for couples that have been together to have mutual friends. All he could be doing is simply sharing stories with her and checking up on old friends through her. This is totally innocent and fine as long as the level of their dialogue is very respectful